Idle is an hybrid between incremental and ZPG genres. It inherits some principles of exponential growth from Cookie Clicker, Clicker Heroes, AdVenture Capitalist. And it dilutes the gameplay to homeopathic doses more familiar by Godville or Progress Quest. 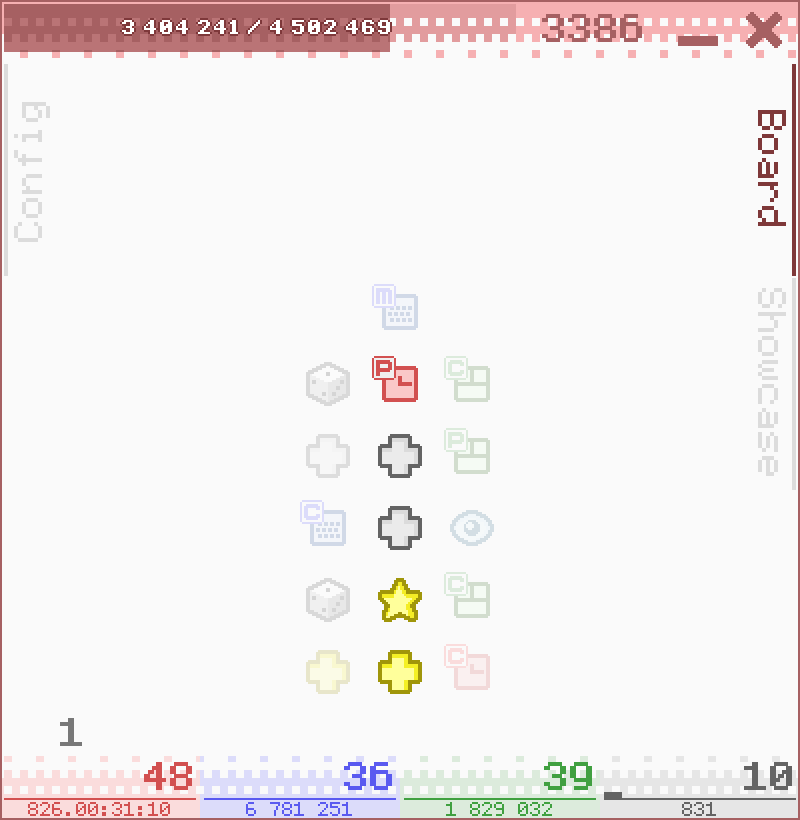 Thus, the game combines exponential growth and interesting mechanics with continuous progression in the absence of the player, which allows you to get rid of the addictiveness of games of the first genre, while at the same time not depriving the player of the opportunity to influence the gameplay.

Game mechanics are based on earning points. Points are earned for all the key actions you perform while working on the computer: moving the mouse, clicking, pushing keyboard keys, waiting. You get these points even when the game is minimized and running in the background. The formulas and interactions of the various upgrades in the game are built in such a way that you can always find something new and interesting in the game, while not significantly changing the existing picture of the world from the beginning.

Idle does not try to make you an addict and does not play on your FOMO.
The game is built on several fundamental principles:

These principles impose significant limitations on the leveling capability and the set of mechanics that are available. But even in such conditions, you can do a lot of interesting things. Basically, I expect that people who are interested in making a perfect plan of development would find great joy in playing Idle. If you liked to perfecting builds in Korean MMORPGs - then perhaps the Idle was created just for you. Yes, there you can hurt your build so much, that starting over becomes a lot better option, than fixing all the problems you have caused with your reckless actions.

How to play it?

General tutorial on the game is given on other page.
Latest version can be downloaded from release list.
If you have questions, you can ask me directly in Telegram.

After starting, minimize it and do your business. It will be nice if you forget about the game at all.

I am not trying to fight with scripting. If you want to configure a script that will spam clicks 1000 times per second - who am I to stop you? Break the game completely! In the long run it should survive at any rate of leveling, but there are some things that are broken by design. Because I believe that a slightly broken balance is the best balance. But slightly. That is, scripters can easily achieve such stat levels, which become possible only after decades or even centuries of continuous game time.