The basis of the gameplay in Idle is leveling. It occurs at any time when the game is running. Regardless of whether the game window is on foreground or not. Player can influence the speed of leveling both by a simple grind (by clicking a lot) and by strategic development planning. This guide is designed to explain how to combine both methods and achieve unprecedented heights in the skill of waiting.

To get the gist you can skip clicking on links for now. This page contains enough infomation for you to start playing game. You will fail your first build either way, so it does not matter.

Deciding on a direction of development

First of all it is worth to decide how we are going to get points. There are three main sources to keep in mind: keyboard, mouse and time. They have different efficiency multipliers. Pressing once a second on the keyboard is more effective than just waiting for a second and doing nothing. However, if you do not press anything most of the time, it makes no sense to upgrade the keyboard. Moreover, its leveling can mess up with leveling speed from other sources (see below about combos). Thus, you should estimate how much time you plan to spend in a state of high activity. If you play Starcraft with 400 APM, then keyboard is most likely a winning option. If you are doing some micro in DotA, it is better to get mouse upgrades. If you are a professional YouTube viewer, picking idle upgrades is the best option. You actually can get every upgrade you see, but this way of development is not suitable for everybody, since it harms specialization, which is usually faster for leveling.

Once we have decided on the key “color”, we need to understand how exactly we will develop it. There are also options here. Upgrades of each color are divided into three types: Power, Combo and Maintenance.

So, it is often better to collect Pow of one color, or not collect these at all. Collecting of Cmb could be useful, since it causes minimal harm, but is of little use if Mnt is low. Mnt does not cause any harm at all, but its benefits can disappear extremely easy if you are not careful with other upgrades.

The upgrades described above exist on the board. Board is a 9x9 grid, which is generated randomly from a given number of power-ups. There are always the same number of different power-ups on the board, but they are located randomly. In order to receive benefits from an upgrade you need to use one upgrade point, which is given to you once each time you level up. 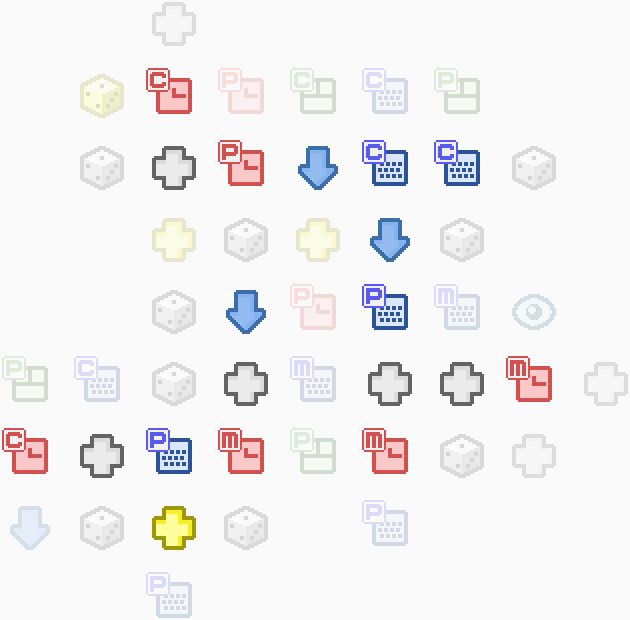 Initially, five upgrades are visible on the board. They can be “bought” by clicking and this action opens up the possibility to see what is on the board next to them. In addition to colored upgrades for the main sources, there are some more special ones. Let me tell you about them.

Pluses make up the majority of cells on the board. There are more of them than anything else, but this does not mean that they are useless. Their main purpose is to open the board quickly. This makes it possible to scout and choose the right upgrades. Pluses give a number of points equal to a certain percentage of the requirements to the next level. This percent is not fixed and can be increased. Pluses are available in two colors. Yellow and grey. Yellow ones give more points and increase efficiency of all pluses you will get later.

Dice are taking second place of the upgrades with highest population on the board. All they do is changing board to a next one. Switching to the new board saves all the upgrades you have obtained, so it can be treated as opening five cells instead of three, usually opened by pluses. In addition to many grey dice, there is one yellow die on the board. It is equivalent to a Pow of all colors and a die.

Arrows, despite its fairly large numbers on board - one of the most useful upgrades in the game. They reduce requirements for the next level. It may seem that they have very little effect on the requirement, but this point of view should be reviewed as soon as possible, because the growth of requirements is based on current value. That is, increasing the level adds a number to the requirements, rather than setting them to a certain value. Thus, a single point subtracted from the first level will save you 10 points to level 10. In the numbers of the game it is very little, but this value accumulates very quickly and scales endlessly with the game time.

Eyes are also a very undervalued cell on the board. In addition to the neighboring cells, they open diagonal cells as well. Thus, they can open up to five cells, which is equal to rolling the board with a die. However, if you have not yet found something valuable on the current board, chances to open it with the eye may be higher than with a die.

Grey stars are equal to the collection of Pow of all colors. In addition to them, there are also yellow ones. Each collected yellow star is as well as the grey star increases the Pow of all sources and gives a multiplier for Cmb, equal to 1%. That is 100 collected yellow stars increases the efficiency of Cmb cells twice. This way you can get exponential growth and this is the essence of the game.

The quick guide is over. More detailed manual can be accessed by pressing F1 with cursor over interesting element. It is not entirely written yet however. Revealing all the details here is likely going to be very exhausting, useless, and will also deprive you of the interest of independent discovery. The game has many nuances that are not specifically mentioned anywhere. It is assumed that the player will be interested in exploring all the features of the game on their own. Some of them are hidden behind certain levels. Some are hidden behind other actions. Experiment. Keep in mind that Idle is not fighting for your attention. If the game stays 365 days a year in the background, you will not miss anything. Except, maybe, one thing.